Most people think that abortion is just the removing of some tissue and cells; but those who participate in the killing of the preborn, including Planned Parenthood, know that it is the killing of a baby.

In 1963, before abortion was legal, a Planned Parenthood pamphlet declared, “An abortion kills the life of a baby after it has begun.”[1.

Those who actually do abortions know that they are killing a baby. Abortionist Martin Haskell stated in the Milwaukee Journal Sentinel on May 28, 1999, that “When or how the fetus dies is of no real consequence.”[3. Milwaukee Journal Sentinel, May 28, 1999 edition.] Another abortionist from Milwaukee put it this way: “We know that it is killing but the State permits killing under certain circumstances.”[4. Cover of Massacre of Innocence: video (Reel to Real).]

Planned Parenthood’s Annual Report (1999-2000) declares that they bloodied their hands with the killing of 182,854 preborn babies in 1998.[5. Planned Parenthood Federation of America Annual Report, 1999-2000.] That is more than ten percent of all preborn children killed in America each year – done by one organization!

If you doubt the humanity of the preborn child, just go to your local public library, pull out a medical textbook on fetal development, and see for yourself what the child in the womb looks like. 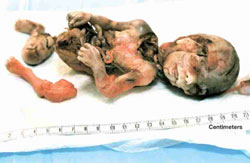