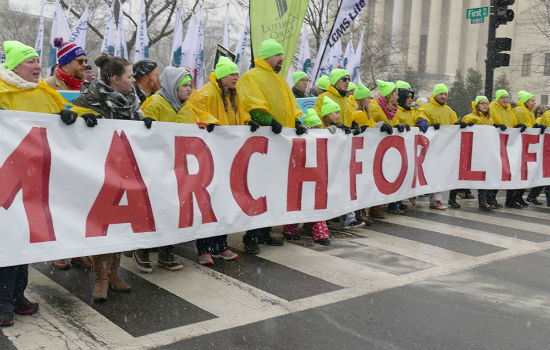 Dear Friends of the Preborn,

Today is the 42nd anniversary of the infamous Roe v. Wade decision by the U.S. Supreme Court. And the slaughter of the preborn continues.

But who is responsible for this slaughter continuing unabated for so many years? No doubt the pulpits in America carry the brunt of the cause, but let me submit to you another egregiously guilty party. I submit to you that it is the pro-life movement itself.

Just two weeks ago for example National Right to Life and certain Republican politicians heralded (with news stories nationwide) their “aggressive 2015 agenda to outlaw all abortions past 20 weeks.” Seriously? This is precisely why the slaughter has continued for 42 years now – nibbling at the edges of abortion rather than demanding total abolition. And until we act differently than we’ve acted in the past nothing will change.

For decades now pro-life groups have nibbled around the edges of abortion. They spend huge amounts of money and people volunteer huge amounts of time – only to have a federal court trample their nibblings. Then the whole process starts again – with the same outcome once again. Many have wearied and left the field of battle because of it.

Consider the cozy arrangement the pro-life groups and the Republicans have created for each other. The pro-life groups offer legislation which nibbles at the edge of abortion – this assures their continued existence as yet another measure will have to be introduced and fought over the following year and the year after that etc.

The Republicans, who like to pay lip-service to the preborn and see value in having them used as political footballs, are more than happy to accommodate the worthless legislation proposed by the pro-life groups. This gets them votes.

“Did not he who made me in the womb make them? Did not the same One form us both within our mothers? -Job 31:15

So useful has this been to the Republicans, for example, that every four years they stampede pro-lifers into voting for their presidential candidate under the mantra that “if the Democrat wins – they will get to appoint Supreme Court justices and Roe v. Wade will remain in force.” Yet, the historical reality is that seven of the nine justices that made up the court that ruled on Roe v. Wade were Republican-appointed. And, during the next forty years, the Republican-appointed justices outnumbered the Democrats 7-2 or 8-1. Yet abortion remains legal via Roe v. Wade.

So what do we do?

First, we need to understand that there is no federal solution to the slaughter of the preborn. The federal government is the problem. They used raw judicial power to impose it upon our nation and they have upheld this evil through raw judicial power ever since.

Second, state legislators and governors need to be prodded to end their cozy relationship with pro-life organizations who seem more interested in prolonging their existence and filling their coffers off the bloody backs of the murdered preborn than they are in abolishing this killing.

Third, state legislators and governors need to know that we have their backs if they do what is needed and necessary and protect the preborn. We need to assure them that we will give of our substance and our very lives to support them – doing whatever is needed both publicly and privately to support them for making a stand.

Fourth, we need to demand that our state legislators and governors give total interposition for the preborn – total abolition of abortion. Frederick Douglas, a well- known abolitionist during slavery times understood how important it is to “demand” and to offer nothing less than total abolition. Douglas wrote: “Power concedes nothing without a demand. It never did and it never will. Find out just what any people will quietly submit to and you have found out the exact measure of injustice and wrong which will be imposed upon them, and these will continue till they are resisted with either words or blows, or both. The limits of tyrants are prescribed by the endurance of those who they oppress.”

Here in Wisconsin state officials need to uphold our state statute 940.04 regardless of what the piece of paper detailing the Supreme Court opinion says.

Fifth, we must offer nothing less to our state legislators and governors than total abolition. Why? Because if we continue to offer less (these laws which nibble at the edges of abortion), our state officials will take it. We will never see the preborn protected until we demand that they are protected.

We have been taught that it is “wise” to take what we can get. We therefore feel weird about standing strong and resisting lesser actions than total abolition. We can only act differently than we have in the past if we look at the reality of what has been done and realize – if we continue to take what “we can get” – the preborn will continue to be slaughtered as the same cycles repeat themselves for another 40 years.

Thank you for your support. May He be glorified in the earth!