A picture is worth a thousand words

Many people ask us,
“Why do you show those sickening, bloody pictures?”
Let us briefly explain our purpose for displaying the photographs: 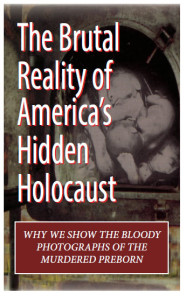 We display these photographs because the media has censored the preborn child from the “abortion debate.” The American press refuses to show the American people what these babies look like who are dying in the womb. We are simply attempting to bypass that media blackout by going to the streets and displaying these photographs.

Now the American people can see for themselves exactly what a preborn child looks like after he or she has been in the hands of an abortionist. Most believe the myth that abortion is just the removal of some benign tissue. These photographs expose just how mythical such thinking is.

The displaying of these photographs reveals to this nation that a great holocaust is going on in our midst, that our indifference towards it must cease, and that we must act on behalf of those who are oppressed.

We also display these photographs to inform our nation that it has violated God’s Law, and to therefore call its people to repentance. Our photographs stand as a haunting indictment upon our nation.

Some say our photos are disgusting and hurt our Christian witness. Our response: have you ever seen a pretty picture of a murder? Murder is disgusting; abortion is murder; therefore, our pictures are disgusting. Beyond that, what hurts our Christian witness more – being silent while our neighbor is unjustly killed or exposing the atrocities being committed against our neighbor (Ephesians 5:11)? We think the former.

What a pathetic people we are if we want to tolerate the oppression of an entire people group, but then become outraged at someone who displays the suffering of that people group.

Jesus taught, “Love your neighbor as yourself.” If we were in the position of our preborn neighbor threatened with an unjust death, we would hope someone would speak up for us, so we speak up for them.

It is important to note that the displaying of these photographs has saved many preborn babies from death by abortion and have spared many women and men the grief of having aborted their own son or daughter. 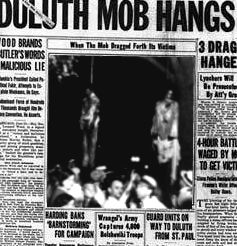 There are many historical precedents for displaying such photographs. Just as we have seen photographs of lynched black men, Jewish corpses, and lifeless Vietnamese children, so we need to look at the frozen, horrid images of preborn babies torn from their mother’s wombs.

Why did they do it? Because those citizens all stood guilty for having tolerated the atrocities that went on in their midst. So it is in America today, we all stand guilty for being silent while this atrocity goes on in our nation. 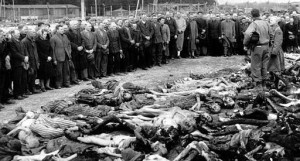 Matthew Brady, the famed Civil War photographer, took and displayed many photographs of the war dead. In 1862, the New York Times wrote the following about Brady’s photographs:

“The dead of the battlefield come up to us very rarely, even in dreams. We see the list in the morning paper at breakfast, but dismiss its recollection with the coffee. We recognize the battlefield as reality, but it stands as a remote one. It is like a funeral next door. It attracts your attention, but it does not enlist your sympathy. But it is very different when the hearse stops at your own door and the corpse is carried over your own threshold. Mr. Brady has done something to bring us the terrible reality and earnestness of the war. If he has not brought bodies and laid them in our dooryards and along our streets, he has done something very like it.”

So our photos have brought you “the terrible reality and earnestness” of abortion.

Our prayer is that people would be moved with compassion for the helpless preborn when they see these photographs and act to see this bloodshed outlawed. Otherwise, God will use His sword of justice and bring retribution upon a nation of people whose hands are covered with blood.

When something is so horrifying we can’t stand to look at it, perhaps we shouldn’t be tolerating it.