“We do not want word to go out that we want to exterminate the Negro population.”[1.

Margaret Sanger wrote, “We do not want word to go out that we want to exterminate the Negro population”[2. Ibid.] in a letter that she sent to Clarence Gamble in which she was outlining her “Negro Project”[3. Ibid.] wherein she wanted to convince blacks to have fewer children and provide them with contraceptives.
Sanger considered Blacks, Hispanics, and others to be “human weeds” and “a menace to civilization.”[4. Margaret Sanger, The Pivot of Civilization (New York: Brentano’s, 1922).]

Sanger herself proposed that dysgenic groups (those with “bad genes”) be given their choice of sterilization or lifelong segregation (work camps).[5. Margaret Sanger, Plan for Peace, Birth Control Review (April 1932), p.107.]

These are the atrocities that Planned Parenthood commits! They are walking in the footsteps of Margaret Sanger! 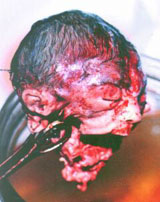